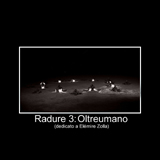 Webbed Hand Records presents the audio release of a multimedia project curated and compiled by Marco Lucchi (who has two previous releases with us). This work brings together some notable talent in the areas of phonography, ambient and experimental music, as well as in poetry and film.

Being third part of the project "radure" (music and creative philosophy), is dedicated to the oltreumano theme.
Oltreumano means "beyond human" and somehow it is related to sacred. Not an orthodox sacred, but maybe something that is beyond human in a shamanic or orphic (or maybe buddhist - the boddhisattva) way.
You must listen to - and intend - it as dialogue between this world and other possible worlds.
It is dedicated to Elemire Zolla. To his memory.

Plus 7 short films by Marco Lucchi, works in "ambient" film, complementing his recording "The Tide."

The cover art is intended for when you burn a CD of the audio tracks. However, if you have the resources, you are encouraged to make a multimedia DVD of the whole production.

Artists include: Aaron Ximm, Marco Lucchi and myself. Following Webbedhands aesthetic modus operandi, the pieces are quite dark, perhaps even stygian, yet always subtle and infused with phonographic recordings. Aaron Ximms contributions are quite exquisite, with unique recordings that will inspire and fascinate those who are particularly interested in the point at which ambient music and phonography meet.

Marcos pieces are typically musically mature, and I was interested to hear the remix of Aquarium by Markus Broesel.

Of course, the pieces I contributed have their own stories behind them. Graviconcentrate begun with a visit to the Institute of Contemporary Arts last year, when I saw a screening of Stalker, the film of Strugatskys curious novel Roadside Picnic. The film really left a mark on me, it wasnt just the searing heat of the summer and the tiny, packed cinema; it had a quality that was half nostalgic for my fathers interest in science fiction and science fiction that seems timeless and strange.

Hitsuji-gumo began with my girlfriend signing Japanese nursery rhymes and folk songs to me, and a friends old vinyls of 70s funk. A combination of the two was never created, but the qualities of each inspired the piece, as well as the imagery the title alludes to.

It looks like Marco worked hard curating Radure 3, so I hope the music, texts and videos are enjoyed by many. And thanks to Webbedhand Records, Ive covered Webbedhand releases over the last year, and Im honoured to feature on a release!"

Reviewer: Silver Fox - favoritefavoritefavoritefavoritefavorite - December 18, 2005
Subject: Magnificent!
i would give this one a 6 star rating, but they only go up to 5? just when i thought i had heard the perfect album, another one appears! Magical and marvelous, and such a rich tapestry of sounds that flow like a waterfall into a dark chasm of ecstatic undulations. not spooky! Dive in!